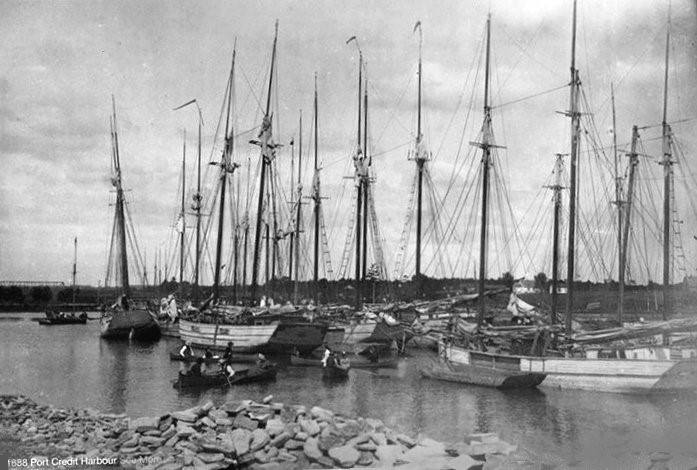 I am a genuine Port Credit resident. I’ve only lived in the village for about 20 years – not as long as most of my friends and neighbours – but I do know what a “stonehooker” is, and whether you live in this town or just enjoy visiting, you can’t really understand Port Credit until you know what the locals know about hooking stone. So here’s what you need to know to feel at home here.

The floor of Lake Ontario at the mouth of the Credit River, extending for a few kilometres on both sides, and outward is made of shale. It’s a dull gray rock. Not much to look at, but it’s a very hard rock so if you were a contractor 100 years ago, shale was a valuable commodity for constructing large buildings. The base of the provincial legislative buildings in Toronto are made of Port Credit shale.

Stonehooking started in the 1870s. The men (and in at least one local case, a woman) lifted hard shale from the lake bottom to the low deck of their schooner (a two-masted sailing ship) using long, wooden scoops similar to a garden rake. Hardly a romantic tale of life on the sea. Little danger, little excitement, little variation in routine. Just a lot of muscle. In short, not much for a village to brag about.

But Port Credit’s stonehookers were somewhat like rogue mariners – half Horatio Hornblower and half Han Solo. Tonnage was supposed to be registered with the Customs and Excise agent in town, but the stonehookers – with their heavy load weighing the schooner down to the waterline – tended to head directly to their destination without the requisite sidetrip to the local post office to give the federal government its share of the profit.

This is how Lorne Joyce remembers the stonehooking trade. Lorne’s parents were stonehookers. (His uncle Bob’s schooner, Olympia could carry 40 tonnes.) Lorne would have loved to have been one himself, but Port Credit’s shale resources had been depleted by his generation, so Lorne became Port Credit’s venerable optometrist instead. More importantly, Lorne was a living encyclopedia of Port Credit history. He could retrieve a tiny bit of information about his village – the name of a long-gone store, or the deputy chief of the fire department – faster than any computer database. And you could be sure of its accuracy.

Lorne talked often about the freewheeling nature of stonehooking. Loads of shale were measured in an elusive measure called a “toise”. (Curious that this word rhymes with “Joyce”). A toise was about a metre high, by two metres wide, by about four metres long – with the key word being “about”. Imprecision was a tool when negotiating a price for the shale load, which often took place as soon as the schooner arrived at the habrour. Lorne gave me vivid descriptions of his father, Louis dickering over the price as the buyers congregated at the dock in Toronto or Hamilton to bid on a load. Naturally, the Port Credit stonehookers could hold out for the best price between potential buyers, thus explaining why the ancient and archaic standard for lading endured.

Stonehooking was not much advanced by technology. The process remained a matter of manpower. The apothecary in Port Credit must have done a booming business in Rub A-535 – a poultice for sore muscles developed by a Toronto pharmacologist in the 1910s, when stonehooking was at its peak.

Like any good story, the tale of stonehooking climaxed just before the closing credits, when 23 local schooners were recorded in the trade in the 1910s. Limited technology prevented harvesting of shale from taking place at deeper reaches, and federal legislation to protect the village’s shoreline from erosion prevented hookers from moving inward, too close to shore, for reserves. Before long the shale within reach of the rakes had been exhausted.

By its very nature, stonehooking was short-lived. Far more Port Credit families found employment at St. Lawrence Starch or the Texaco refinery than those who earned a living out on the lake. But taller tales come our way from the sea than from within factory walls. It seems stonehooking is more important to Port Credit today, as a symbol of the village’s unique place in marine history.

For one hundred years the fate of the village of Port Credit has been decided under the 25-foot tall ceiling of Clarke Hall. From 1941 to 1973, Port Credit’s own elected government worked from this Lakeshore Road landmark; keeping an eye on the community’s progress and prosperity. So who is this “Clarke” guy that the hall is named after?

The City of Mississauga is connected to five treaties signed between The Crown and the Indigenous Mississaugas between 1805 and 1820: Provisional Agreement 13-A, Treaty 14, Treaty 19, Treaty 22 and Treaty 23. Today, we explore these treaties and their connection to Port Credit.