For one hundred years the fate of the village of Port Credit has been decided under the 25-foot tall ceiling of Clarke Hall. From 1941 to 1973, Port Credit’s own elected government worked from this Lakeshore Road landmark; keeping an eye on the community’s progress and prosperity. Even after Port Credit’s affairs were merged into Mississauga’s, with local decisions moved miles away, Clarke Hall continued to be the place where voters cast their ballots in local, provincial and federal elections, and where the candidates were put to the test at “town halls”. Clarke Hall remains Port Credit’s venerable place of meeting.

So who is this “Clarke” guy that the hall is named after?

If you go by the name on the stone plaque at the top of the building’s curious roof line, which reads “A.R. Clarke Memorial Hall”, then Clarke Hall is named in honour of Alfred Russell Clarke. But as we’ll see, the hall is more a memorial to A.R.’s wife than to A.R. himself.

A.R. inherited a tannery which is father started in Peterborough in 1854 (despite some advertisements in the early 1900s where A.R. set the founding date incorrectly as 1852.) In addition to moving dates around, A.R. moved the tannery to Toronto in 1882, with the intention of expanding the family business into an international retail giant. He claimed, by 1910 that A.R. Clarke and Company was the largest leather manufacturer in the British Empire. This was another of A.R.’s exaggerations, but to make good on this boast, he convinced 100 Toronto businessmen to join him on a voyage to the UK to convince Brits that Canadians could produce quality goods at a good price.

A.R. made all the arrangements and booked his corporate crusaders on the finest ocean liner leaving Manhattan.

Unlike Titanic, which White Star Lines claimed to be unsinkable, Cunard Lines made no such gloat of its boat. So far Lusitania had made 200 voyages across the Atlantic without incident. It seems A.R.s’ cruise was going to be as much a relaxing vacation as it was a vital business trip. That is until early afternoon of day seven when, just hours from journey’s end, a torpedo from a German U-boat blasted a hole in the Lusitania’s starboard hull. About 1,000 people went down with the ship. Fortunately A.R. managed to be in the right place to find a lifeboat. He was rescued after bobbing on the frigid Irish Sea for seven hours.

A.R. died weeks later in a London hospital – one of about 200 rescued passenger and crew to die of hypothermia or pneumonia. This left A.R.’s only son Griffith to take over the leather company. Had A.R. died a hundred year later, there’d be no problem with a wife taking over – and Mary Louise was both willing and able to do so – but in 1915, women in the world of business were there to take notes and file records for their male bosses. Griffith clearly didn’t want the job. He preferred to be racing boats on Lake Ontario from the family’s summer home in Lorne Park Estates. Griffith’s many absences from board meetings essentially left Mary Louise in charge.

Busy running A.R. Clarke & Co. from behind the scene, Mary Louise kept putting off a plan to dedicated a memorial to her husband . . . until one Sunday morning in 1921, at Port Credit’s Methodist Church.

When A.R. was still around, the family attended the massive Metropolitan Church in downtown Toronto, but Mary Louise preferred the intimacy of Port Credit’s Methodist meeting place (today’s First United Church) which the family attended in summer when they resided at the Mississauga cottage they called Sunniholm.

After A.R. died, Mary Louse made First United her home church, and it was there one Sunday that Reverend James Dudgeon announced that their quiet little kirk was becoming overcrowded and that a fundraising campaign would have to be undertaken to build a new hall for Sunday school classes and for church gatherings. Over the next few months, the congregation raised $3,000 from donations, with another $2,000 coming from bake sales. This left the church $9,000 short. That’s when Mary Louise put aside her long-delayed plan for a memorial fountain to her husband, in their Rosedale neighbourhood. Mary Louise made up the church’s shortfall; donating $5,000 and carrying the rest of the debt as a mortgage. Some of this was offset by another generous donation – this one of $1,000. It came from Vivien Lytle, who just happened to be Mary Louise’s daughter.

You can’t miss Clarke Hall today as you drive, walk or cycle along Lakeshore Road. It’s unlike any 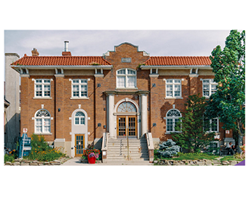 other building in the village . . . or in Canada, for that matter. Its office facade (completed in 1925, in front of the 1923 hall) is a jumble of architectural styles that shouldn’t work together, and often don’t.

Not for lack of effort, I’ve tried to track down who the official architect of Clarke Hall is; without success. Not that it matters. I suspect Mary Louise stood behind the architect the whole time, offering a myriad of suggestions while he politely obliged his patron.

The brick is about the only thing traditional and local about Clarke Hall. Port Credit’s own busy brickworks was just a block away. Everything else is folly. Roman columns hold up a pediment that isn’t there. High above the missing pediment is an odd cornice which mimics a Spanish mission. On both sides of this false cornice is a matching tile roof in a Spanish colonial style. (These are the only two design elements that complement each other, and in this sense add to Clark Hall’s idiosyncrasy by being cohesive features in a façade that otherwise revels in its cultural clutter.) The curvilinear cap where A.R.’s plaque resides is contrasted by the sharp lines of the American-style keystones that attempt, awkwardly, to accent the Greek-temple arched windows below.

But it’s all for the best. Clarke Hall’s quirky face is its charm. Port Credit is a quirky village, and it’s likely that Mary Louise was just as peculiar as her red brick masterpiece.

And of course, Clarke Hall is still Port Credit’s premier place of meeting, 100 year and counting.

The City of Mississauga is connected to five treaties signed between The Crown and the Indigenous Mississaugas between 1805 and 1820: Provisional Agreement 13-A, Treaty 14, Treaty 19, Treaty 22 and Treaty 23. Today, we explore these treaties and their connection to Port Credit.

I am a genuine Port Credit resident. I’ve only lived in the village for about 2o years – not as long as most of my friends and neighbours – but I do know what a “stonehooker” is, and whether you live in this town or just enjoy visiting, you can’t really understand Port Credit until you know what the locals know about hooking stone. So here’s what you need to know to feel at home here.